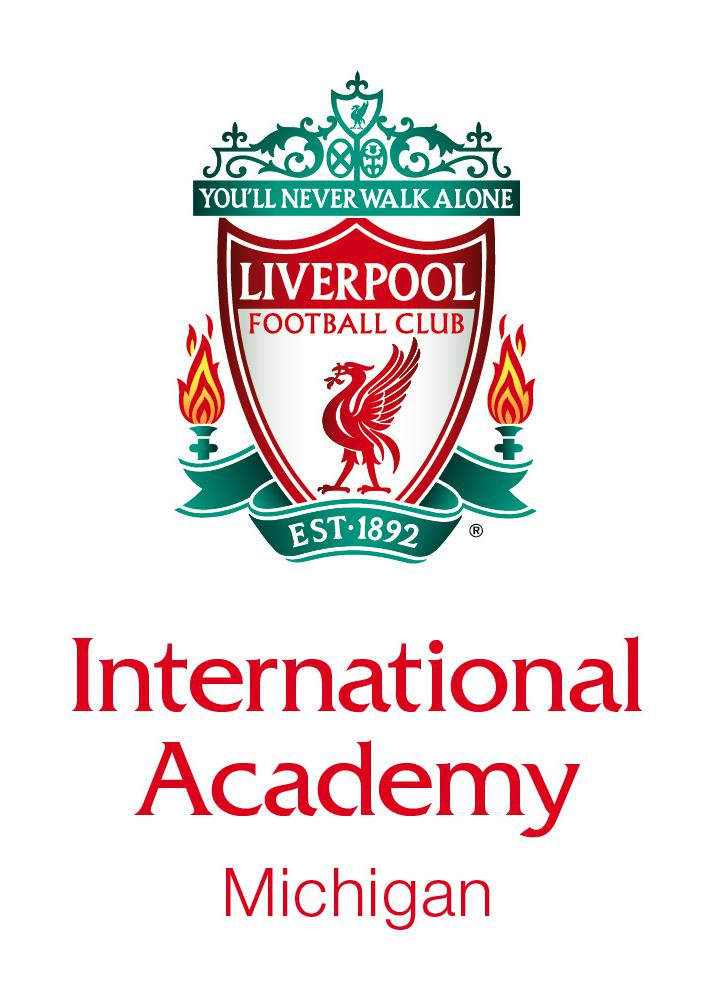 Liverpool Football Club International Academy Michigan (LFC Michigan) is a premier player development academy.  Since June 2016, the club has expanded from one site in Bloomfield/Pontiac (Central at UWM Sports Complex) to six sites in Southeast Michigan (Clarkston/North Oakland, Ferndale, Ann Arbor, and Hartland) and Windsor, ON, and has grown to more than 1,600 youth players, including travel teams ages U7-U19 and youth development programs for new and recreational players ages U4-U11.

The club was originally founded in 1990 and was known as Force Football Club for more than 20 years.  In February 2016, Force partnered with Liverpool FC International Academy to become its first official partner club in the Midwest.

This partnership united Force's reputation for high quality player development, leadership, and professionalism here in Michigan with the rich, storied tradition of Liverpool Football Club in England. The new identity has enhanced our level of training and competing, but in many ways we are the same great club that has been serving the Michigan soccer community for more than 20 years.

LFC Michigan continues under the leadership of Owner and President Andy Wagstaff, Director of Coaching Kevin Garner, and Director of Operations Danny Price.

As an International Academy for the prestigious English Premier League club, our players:

Our mission is to develop every player holistically.  Our objective is to offer the most authentic Liverpool FC development program and club experience, whilst ensuring all player learn to love the game.  We focus on the complete development of each individual both on and off the pitch, through experiences that will help them:

Our vision is to grow and serve the youth soccer community without compromising our values of Ambition, Commitment, Dignity, and Unity.  We aim to provide the highest level of coaching and competition for our players and for them to embody “The Liverpool Way.” These can be achieved by demonstrating best practices for:

The Liverpool Way is an ethos that captures the spirit and character of LFC and its worldwide family of players and fans.  It is a set of principles and values -- Ambition, Commitment, Dignity, and Unity -- that centers everything we strive for on and off the field.  Off the field it prioritizes family and community, while on the field it provides the building blocks necessary to draw out the best of what we want from our players and our teams.

AMBITION
Knowing that dreams are there to be achieved. Nothing is impossible.

Have the courage to take risks and learn from honest mistakes. It makes us braver next time. Pursue ever-higher goals with your feet on the ground.

COMMITMENT
Put your heart and soul into everything – go that last mile to do things right.

Live by hard graft and continuous self improvement. Be proud, professional and enthusiastic in all aspects of the club.

Be true to yourself and trust each other to do the right thing in any given situation. Treat people well expect nothing back and the pride will flow.

UNITY
Work together to bring the best out of each other, on and off the field.

Believe in each other’s ability and expertise.  Collaborate for the common good across all our communities.

Diversity, Equity & Inclusion  As a club, we are committed to promoting diversity, equality, and inclusion.  To that end, we have put together a “Club Diversity Statement” as a pledge that we will always strive to create a welcoming environment that is as inclusive as possible, where those who may see themselves as different, still see themselves as part of our family.

Please read our statement below.  We also invite you to watch LFC Foundation's "Red Together" video here: 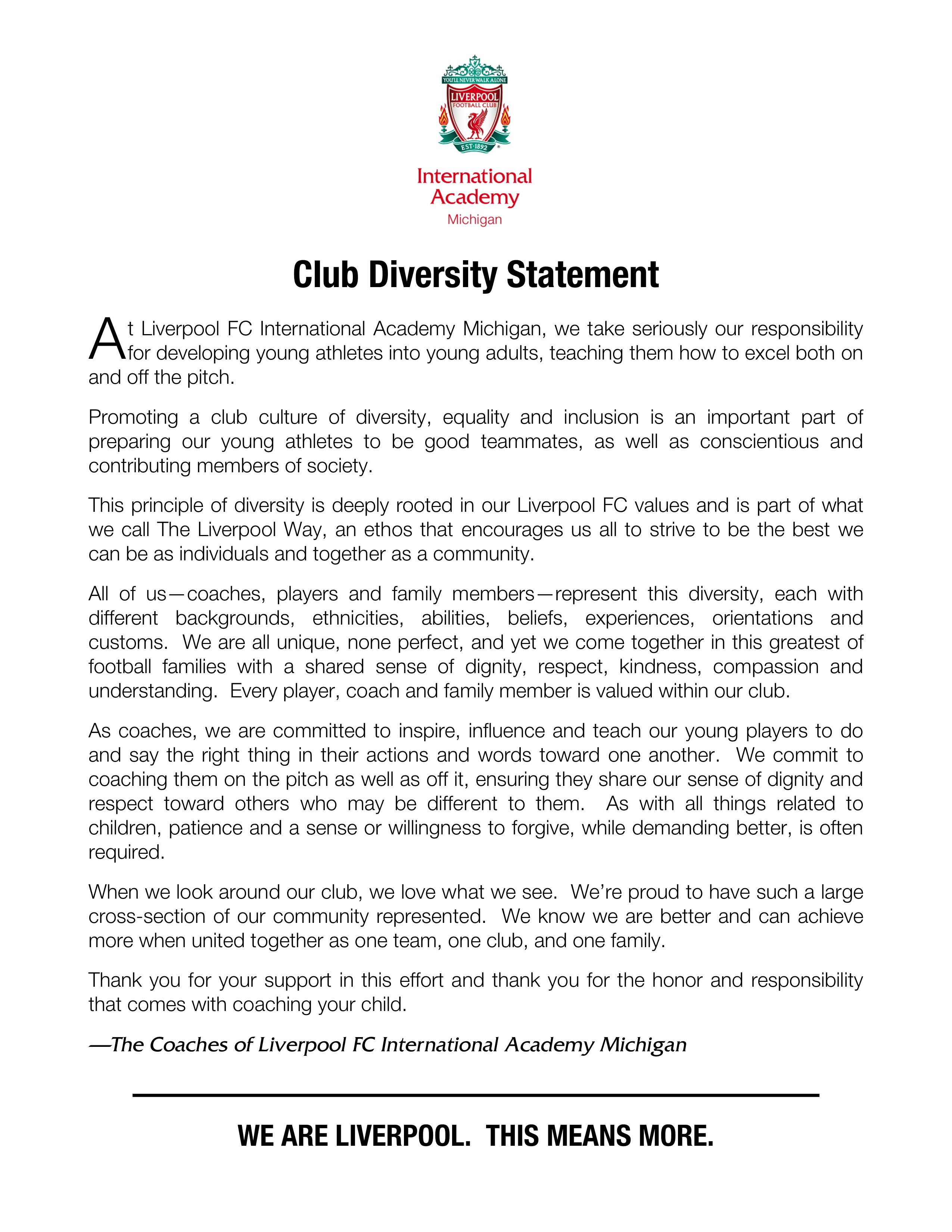 "Bloomfield Force" started as the "travel" component of the Bloomfield Hills Youth Soccer League (BHYSL) back in the 1990s by Dr. Bill Nixon, Robert Sisk and Rick Pinkos. These three, with the help of Bill Powers, created a travel component to the league’s existing recreational program. This created an opportunity for the best players to develop their soccer abilities in order to prepare them for High School soccer.

The club, which originally started with only four teams, offered Andy Wagstaff a position as a club trainer which evolved into a full-time Director of Coaching position in 1995. At that time Andy was still playing professionally for the Detroit Neon, but his enthusiasm for the game enabled him to create some new policies that helped shape the future of the club.

The first policy implemented was to start teams at U10 rather than U12, continue beyond U14, and play all the way up to U18. Next was to hire only coaches who are considered qualified and, most important, initiating a grassroots program called the "Center of Excellence." This grassroots program enabled the Force to select the best young players from the BHYSL and start training them under the direction of the new Director of Coaching.

Those first young teams that started with the club went on to achieve great things. The Boys 1990 age group eventually won the State Cup for Michigan at U18 and became the club’s first boys’ team to compete in the Regional Championships. Several of those boys went on to play collegiate soccer at Princeton, Oakland University, Michigan, MSU, and Washington University.

In addition, the Girls 1989 age group went on to win back-to-back USYSA National Championships, the first time ever in Michigan. Members of this team went on to represent Michigan, UCONN, Villanova, Michigan State, Northwestern, and Oakland University, and this group also produced two National Team players in Jackie Carron (University of Michigan) and Laura Heyboer (Michigan State), who started with the Bloomfield Force at U12 and U14, respectively.

It was in the early 2000s that Andy first began to work part-time with Liverpool Football Club’s Academy, where he was responsible for training the players and communicating to the parents of the U6-U8 age group.  One of his accomplishments while there was designing a program called “Mini-Soccer” to scout local talent in conjunction with connecting the local community to the academy.  The program was successful and used by the club for many years.

Many years later, in February 2016, this experience helped open the door for Force Football Club to form a partnership and become “Liverpool FC International Academy Michigan.”  This partnership united our reputation for high quality player development, leadership, and professionalism here in Michigan with the rich, storied tradition of Liverpool Football Club in England. The new identity has enhanced our level of training and competing, but in many ways, we are the same great club that has been serving the Michigan soccer community for almost 30 years.

Since June 2016, the club has expanded from one site in Bloomfield/Pontiac (Central at UWM Sports Complex) to five sites in Southeast Michigan (Clarkston/North Oakland, Ferndale, Ann Arbor, and Hartland) and Windsor, ON, and has grown to more than 1,600 youth players, including travel teams ages U7-U19 and youth development programs for new and recreational players ages U4-U11.